The love of a dog

For those who don't know, we had to let Charlie go this week.  His pancreas was failing, his abdomen was filling with fluid, and after a night in ICU, he was not getting better.  If you have followed our journey with Charlie, we got him shortly after we got married.  It started with a flight back from Florida.  But it wasn't just a flight back to Seattle, we had a layover in Denver...but were redirected to Colorado Springs...and then our flight to Seattle was cancelled... so we tried to get the next flight.. but the next one wasn't until the next day... but we HAD to get back because we were going to meet Charlie for the first time... so I luckily found a flight to Portland... close enough for now... so we are running through the airport, Susie with a horrible migraine... and off we go, last to get on, and then on the tarmac, I called to rent a car... all cars booked.. then called another one... all we have is a Cadillac Escalade... "I'll take it! We'll be there at 3am"... I shut my phone off and we land in Portland around 2:30.  We go to the rental counter... and get our Escalade... and off we go... no sleep, 3am... and we drive to Seattle.  Susie quickly fell asleep and I drove... I drove... and I rolled down the window..singing as loud as I can... stopped and picked up some red bull... I was exhausted and as the sun started to rise... we reached Tacoma... next stop Bothell... after fighting sleep for a few hours... we arrive at Bothell at 7am and I go to sleep... finally... we sleep for about 2 hours and then return the car... then at 2pm we drive to PetSmart to meet Charlie and his foster mom.  So we meet him... and he sits on his hind legs saying, "pick me... I'm amazing"... and then he rolls over on his back and I just knew I we needed him.  We already went through so much to get there and we needed him... little did we know how much we needed him.  So begins our journey with Charlie Mann, formerly known as Grisom.

We are not sure why we went with Charlie, maybe 2 1/2 men, Charlie Sheen... but regardless, he was a Charlie.  We were so excited and he was the king of the jungle in our backyard. We took him to Marymoor park and were excited to see him outside and off leash with other dogs.  And off he went... saying hi to all the other dogs... saying hi to other people... and completely ignoring us... That's our Charlie...

Later on we decided it was time for a little training for him... so we took him to the Academy of Canine Behavior (Highly recommended).  He was so good the first class, and all the other people were like why is he here?  He seems perfect... and then the following class the instructor was explaining different training collars... and THAT was not happening... and then they all had that look, "Oh that is why he is here". He bit the instructor. That's our Charlie.  He graduated from obedience training, not with honors, but he graduated.. LOL.

I could go on for the past 7 years of how he whined every time we ate... how he loved to EAT.  How he LOVED car rides.  He was the best dog to travel with.  He would sit in his basket and go to sleep and then wake up and let you know he was awake.  He loved the snow. He traveled from Bothell, WA to Portland (Riverplace hotel, HIGHLY RECOMMENDED) to San Francisco to Arizona to Oklahoma to Mississippi to Atlanta, Georgia.  He would chase squirrels, and his brother Lego would join him when the weather was nice. Charlie didn't care about weather... he had his goals... he was stubborn, persistent, sensitive, and everything you read about a Cairn Terrier, that was Charlie.

Near the end, he couldn't run like he used to. He tore his ACL thinking he could... then he was diagnosed with diabetes... and I thought I would be so irritated to have to give shots twice a day... but it was an honor... he made me a dad. He made me a better person... he taught me to put him first... over work... over video games... over myself.  He soon developed cataracts and we decided we needed to get him surgery because he was sad he couldn't see.  He would walk into walls and then he just would lay in bed and not do anything... so we got him surgery... and Susie was an amazing mom... she gave him drops multiple times a day... and we did everything for him.... there is A LOT more that happened, but I won't go into it here, I want to focus on how amazing he was for us.

He taught us so much about being parents... about love... about patience... about tolerance... and about grieving... I have never knew what it was like to grieve... but now I do.  I am not a cold-hearted person any more... I have a heart.  I know love... I know sadness. I feel emotions... and I love Charlie.  Charlie was an amazing dog and part of our family. He will be missed and I thank him for EVERYTHING he taught me about being a good person, a good parent, and how to not think of yourself... but think of others....

I LOVE YOU CHARLIE! 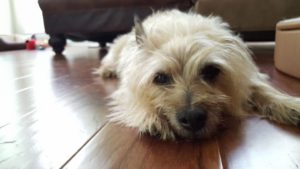 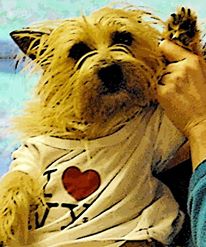 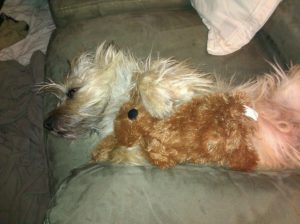 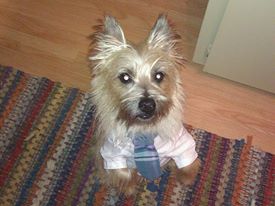